I've been using Xamarin Studio for some time and now use it daily for my work with Mono. I've also been dabbling a bit in F# and have been keen to start using it at work. Untypically for a Xamarin Studio user I don't use it for building mobile apps but have been writing various parts of a production system which I'm slowly moving off Windows. Anyhow, what better place to start than converting some of the C# libraries to F#?

Normally when working with Xamarin Studio adding a library project is much the same as you would do with Visual Studio. Be aware the referenced version of .NET might be different when creating a new project, the defaults for C# and F# are different on my system which I had to change (I needed to change it to Mono / .NET 4.5.).

So, once I have the correct framework referenced I just add the project as a reference.

Great, now we're all good to go. Here's my crude F# library that I want to call.

And here's the C# code that calls the library in the console project.

Fairly straightforward and if I hit the play button I get the output in the console I'm expecting.

But although it works as expected the Xamarin Studio experience isn't so smooth. In my code editor the statement completion doesn't work and I have the unwanted red squigglies. If your project expands it looks like it's littered with errors. 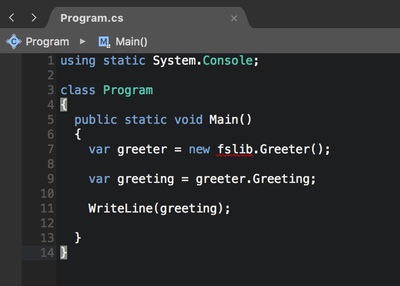 The way out of this is to reference the dll file and not the project itself. So untick the project in the Edit References dialog.

And then browse to the dll file from the browse button on the .NET Assembly tab.

Now if I build my project the red squigglies disappear and I have statement completion.

However, when hit the play button I am no longer able to debug the F# code. I struggled with this for a while and should have guessed the Mono debug files are missing (a big thanks to Jason Imison from the Xamarin team for point this out to me here!). So just copy over the mdb file from the F# library and place it in the Debug folder of the C# project ...

... and the debugging will work as expected.

You'll need to do this with each build if your code changes but this can be done by adding a simple cp command to your build step.

That's it. Hopefully the Xamarin team will get this fixed but if you follow these simple steps you can work effectively without too much bother!