You pretty have to use SSL these days but getting started with ASP.NET Core was a bit of a challenge for me. As usual I had to scour the net for bits of information and then cobble a solution together and this post is basically what I did to get from development to production. The code for this tutorial can be found here.

First it's nice to use SSL in development so your coding environment best simulates what you'll be doing in production. There's an excellent post here on setting up SSL locally with ASP.NET Core. It's well worth reading so I won't go into too much detail but this is basically what you need to do.

First create a certificate and key using openssl. Create a localhost.conf file for the default values like mine here and substitute password at the end for something else (if desired).

Then create the .pfx file which will be added to your local keychain. Again this uses openssl. Enter the password used in the previous step when prompted.

Open the macOS Keychain Access and drag the pfx file into the System section. Enter the system / admin password when prompted. 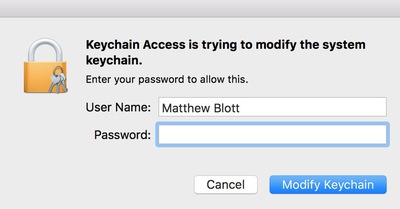 Then enter the password created with the file in the step earlier.

Then double-click on the Keychain Access entry and set to Always Trust so you don't continue to get a warning in the address bar when using https. 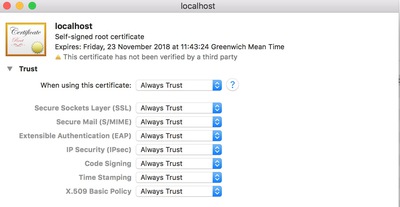 You can run the following as a check if desired.

My code for loading the certificate is pretty similar to that of the tutorial I refer to at the start. Below is the code for the Program.cs file where you'll have the Main method. One change is I've included the environment variable as I like to have a hosting.json file for each environment (I went to deploy and realised I already had a site using the default port 5000).

Here's an example of the hosting.json file. The password will be the same as that used earlier when you created the certificate.

If you type dotnet run from the command line you should be able to access the site at https://localhost:5000.

So far this is pretty much as in the other tutorial. However when I came to deploy was when it got a bit confusing. If you check the official ASP.NET Core documents here on how to deploy to Linux it gives you a lot of detail on nginx (too much in fact, you don't need to build nginx from source on Ubuntu as it instructs) but is missing how to tie in the ASP.NET code. There's also a super easy way to install certificates and their configuration (which we'll get to).

The main thing that threw me was the nginx site configuration here.

I've deployed a few ASP.NET Core sites and at first glance there doesn't seem anything wrong. But if we look at our hosting.json file we have the following.

That's https in the urls property. I confess it took me a while messing around before I realised this! You just need to change this to make sure it corresponds correctly with hosting.json. For the rest of the configuration we'll take the easy route ...

This uses the excellent (and free) Let's Encrypt Certificate Authority. Here's a good tutorial on installation but the lines you'll need to run are.

Now to install a certificate for your site run the following (replacing domain.com with whatever your domain is).

And ... er that's it for your server certificate! If you check your nginx file you'll see the appropriate changes have been made (domain.com in my case refers to my real world domain).

One point of note is these certificates need to be renewed and if you google you'll see this referred to but when you install certbot it does this for you with a package crontab (see /etc/cron.d/certbot).

But ... we still have a problem. What's the certificate that's being loaded in our ASP.NET Core code? Right. Well we could ditch this code and just use a standard ASP.NET Core site and use the nginx rules. Again, I hit a problem: I simply could not find a way to load our certbot certificate with ASP.NET Core. The certbot certificate does not use a password (a good thing, we don't want our users having to enter a password when they browse our site) but there's no way I could get the certificate to load with a blank password. So, simple. I just followed the same steps at the start with openssl and created a local certificate for the site on the production server. It's up to you if you want to use one certificate for all your sites or one per site (just change localhost to something else and reference it in /etc/hosts to 127.0.0.1). It would be better if we could get both nginx and ASP.NET Core using the same certificate but I think this is a good enough work around.